“A lot of my generation think it’s politically incorrect to like beautiful things,” says actress Winona Ryder, who, with her dark eyes and china-doll complexion, is a thing of beauty herself. “They’re into camp, but it’s not for me. Working on The Age of Innocence spoiled me, because everything I looked at was a work of art.” 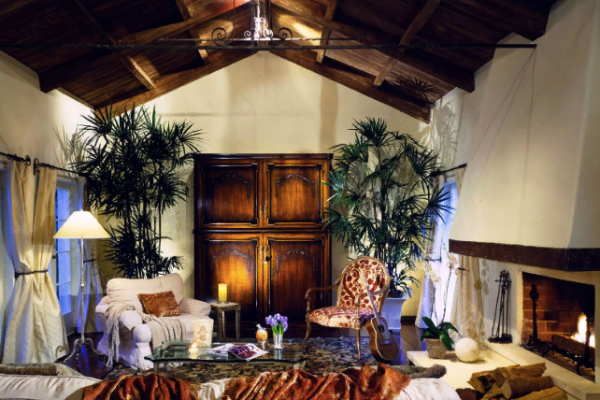 But while May Welland, her character in the Martin Scorsese film, lived in a splendid nineteenth-century world portrayed by Edith Wharton, Ryder herself is decidedly contemporary. The actress, who is currently starring in the film adaptation of Isabel Allende’s novel The House of the Spirits and in the comedy of twenty-something life Reality Bites, can dress up in antique lace and high-heeled slippers one day and dress down in baggy jeans and high-top sneakers the next. On her bookshelves, volumes by Wharton, Jane Austen, and E. M. Forster vie for space with first editions by J. D. Salinger and Harper Lee. In other words, Ryder is what you might call a modern romantic.

It’s no surprise then that her Beverly Hills house and her New York City pied-à-terre are not only feminine and charming but clean and contemporary. Credit for this balancing act goes to Kevin Haley, an actor (and good friend of Ryder’s) who has recently added decorating to his list of accomplishments. “I was always interested in furniture,” he says, “and I want everywhere I live to be perfect and beautiful, so I was always overhauling my apartments. I was great for landlords,” he adds, laughing.

For Ryder, who had lived out of suitcases for years before she acquired two homes in relatively short order, Haley came along at the right time. Or, as she puts it, “He saved my life.” Ryder’s small 1920s house in Beverly Hills had been nearly stripped of its Mediterranean charm by insensitive modernizations. “It was creepy,” she recalls with a grimace. “I could never stay there by myself.”

Then she saw what Haley had done with his own apartment, and Ryder knew she had found an aesthetic soul mate.

Haley’s first task was to restore Ryder’s house as closely as possible to its original state. He had the orange-toned stain sandblasted from the timbered ceiling in the living room and rescued graceful wrought-iron hardware and curtain rods from the garage. He also turned the tiny patio and steeply sloping backyard into a romantic garden where Ryder loves to sit and paint.

Haley often finds inspiration in the first piece that he buys for a house. In this case, it came from a nineteenth-century Czechoslovakian chandelier with amethyst crystal drops that now graces the dining room. Similar jewel-toned accents—in the rich green velvet on the dining chairs or the ruby red of the cut velvet on a living room chair—punctuate a palette based primarily on the warm whites of walls and slipcovers. Antique, reproduction, and contemporary furnishings coexist easily under Haley’s direction, highlighted by such whimsical touches as the lace-patterned glass doors that he designed for Ryder’s dressing room.

In contrast, the actress’s New York apartment in a landmark downtown building offered Haley the chance to create a different mood entirely. “The word that came to mind was glamour,” he says. While the rooms have little architectural detail, their high ceilings and tall windows lend them an urbane and sophisticated feel.