46. Will and Jada Pinkett Smith

The Smiths’ domestic odyssey began when Will was working with costar Gene Hackman filming the 1998 thriller Enemy of the State. “Gene loves Santa Fe,” Will says. “He has a house there, and he always talked about it. And then Wild Wild West came up, and we were shooting outside of Santa Fe. So I thought, Let me go see Gene’s house.” He admired what he saw. “I just loved that adobe flavor and feeling.” 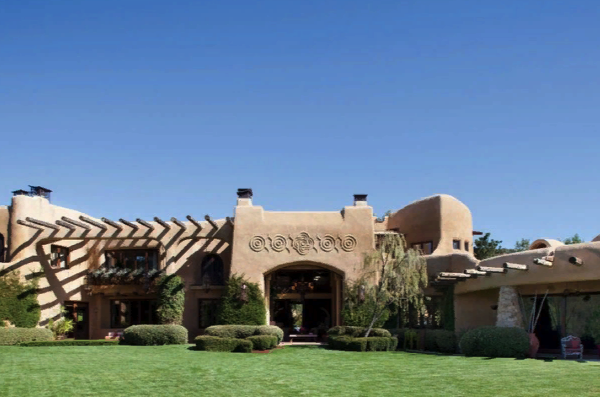 As it happened, Hackman’s home, designed by local architect Stephen Samuelson, had been published in Architectural Digest (April 1990)—as had another Samuelson Santa Fe residence, the adobe retreat of Carol Burnett, which graced the cover in December ’96. The photos convinced the Smiths to contact the architect, and their collaboration took off in earnest the following year, when the couple acquired a ranch nestled in the Santa Monica Mountains near Calabasas, California. One of the primary draws of the property was a picturesque man-made lake with views of majestic Saddle Peak in the distance. In short order Will and Jada purchased a string of adjacent plots to assemble the rambling 150-acre parcel: their sylvan Shangri-la.

Given the environmentally sensitive landscape and the area’s labyrinth of regulations, the building-permit process dragged on for four years. Construction finally commenced in 2003, after Samuelson and his team had regraded the property to its natural topography and restored sections that had been leveled for equestrian use.

The architect marshaled a small army of workers to apply the hand-troweled plaster that defines the character of the two-story home, which curves around itself, encompassing a motor court. “The aesthetic is anchored in history and the various interpretations of adobe in Persian, Moroccan, Spanish, as well as Southwest American cultures,” Samuelson explains.

The textural quality of traditional three-layer stucco, with all its inherent imperfections, is echoed in exposed ceiling timbers harvested from old homesteads and barns. Banisters of hammered wrought iron and floors inlaid with river stones in spiral and infinity-knot patterns reinforce the project’s hand-forged ethos and spiritual aspirations.