One of the great luxuries of life is a getaway that keeps clamor and chaos at a distance. Fashion designer Diane von Furstenberg’s live/work space in Manhattan’s Meatpacking District—a glass-and-steel aerie the occupant calls her “tree house”—appears to be just that. But the isolation of the lofty perch is deceiving. Just beyond its transparent walls the city’s icons, old and new, shout for attention: to the northeast the majestic Empire State Building, and to the west the High Line, a mile-and-a-half-long park built atop abandoned elevated train tracks and of which Von Furstenberg was an early champion. And all around is an edgy, effervescent quarter exuding equal parts glamour and grit. 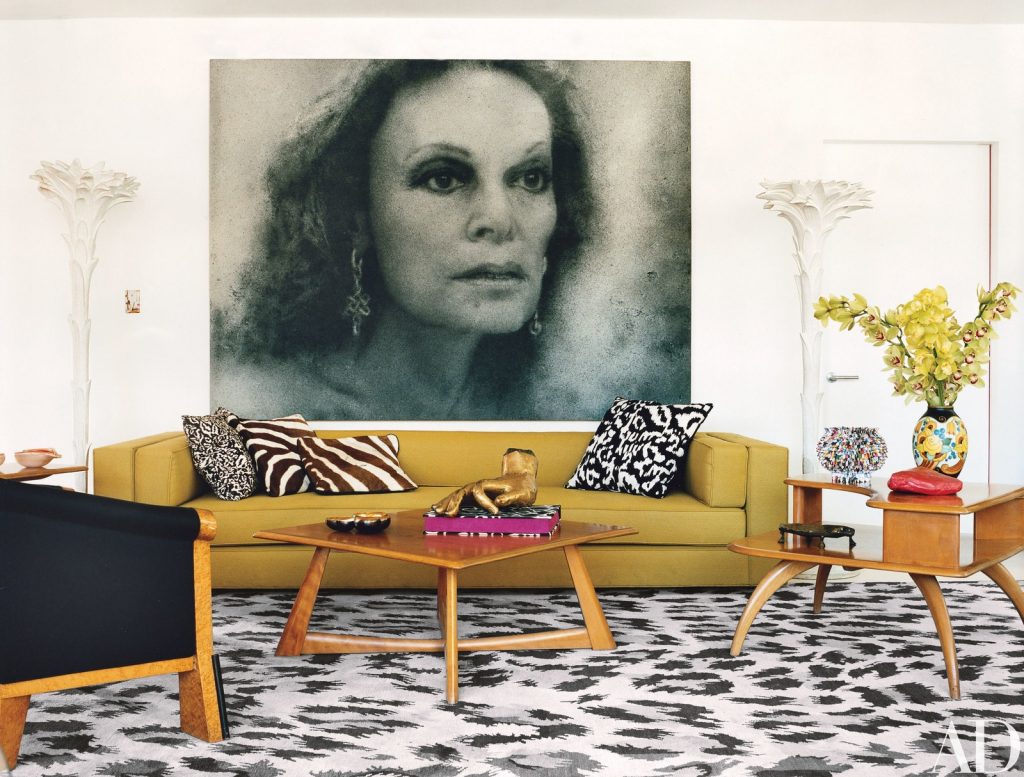 “Everybody told me when I came to this neighborhood that I was crazy—that it was full of drag queens, that it smelled awful because of all the butchers,” says the Brussels-born designer, who moved to New York in 1969 with her first husband, Fiat scion Prince Egon von Furstenberg. (They had two children, and divorced in 1983; in 2001 she married media mogul Barry Diller.) “All of that is true,” she continues.

The crowning achievement of a six-story, 35,000-square-foot structure comprising Von Furstenberg’s design studio and flagship store, the penthouse is the latest in a parade of distinctive personal spaces that began with a baronial Park Avenue apartment. “When I was young, I lived like an old woman,” the 65-year-old grandmother of three explains, “and when I got old, I had to live like a young person.” For the construction of this particular spot, Von Furstenberg hired Amale Andraos and Dan Wood—Rem Koolhaas protégés and founders of the architecture firm WORKac—to merge a pair of Victorian redbrick buildings she acquired in 2006. What was once a gap between the structures is now a concrete staircase that leads from the ground floor to a rooftop lair containing a live/work space and, above that, a 900-square-foot master suite with a terrace.

“We wanted a shaft of light that would cut through the building diagonally,” Andraos says, “and we knew it needed to originate at the top of the building. We were inspired by the bold, faceted jewelry Diane was doing at the time.” Strategically placed heliostat mirrors direct sunlight down the 80-foot staircase, whose margins are dappled with some 3,000 Swarovski crystals.

“Diane likes to have a hideaway above her store,” her husband says. “I’ve been there, obviously, but it’s not for me. It’s eclectic—there’s no defined style, but the common element is a comfort you can sink into. There’s nothing pretentious.” Though the globe-trotting Von Furstenberg’s primary home is Cloudwalk, the Connecticut country house she bought nearly 40 years ago, when she is in New York City she stays in the penthouse or bunks at Diller’s apartment at the Carlyle hotel. The couple also spends time on Eos, Diller’s 305-foot yacht; at her Paris apartment; or at his vast Beverly Hills estate.

The most striking aspect of Von Furstenberg’s interiors is how intensely alive they feel. Books and photographs crowd every surface of the penthouse, and walls are painted with inspiring words—WISDOM, TRANSFORMATION, JOY. A sprawling Ruhlmann table commands the combination office/living area. Chairs covered in zebra hide sit atop leopard-print carpeting, and a Salvador Dalí lip sofa discourses with Chinese artist Zhang Huan’s portrait of Von Furstenberg, her aquiline face executed in ashes. Lips and hearts are a theme, though she collects neither and generally disapproves of collecting, she says, “because people become prisoners” of their possessions.

“What kind of style is this?” Von Furstenberg wonders aloud, traipsing through the sunny rooms in a gauzy printed caftan, an iPad in one hand and a Moroccan tea glass filled with vintage Dom Pérignon in the other. “It’s just odds and ends, all the things that have happened throughout my life.” Furnishings are relatively few, the dominant one being a bed sheltered within a bamboo pavilion hung with panels of linen.