“John and Kelly come to Maine to relax,” says designer Christopher B. Boshears. “The house had to be comfortable, but the structure demanded elegance.”

Boshears’s goal “was to bring to life the feeling of an English country house,” he says. “I combined linen draperies, damasks and velvet upholstery fabrics with a variety of furnishings.”

John Travolta is morphing into Sister Parish. Sitting across the table, one of the world’s legendary actors has transmogrified himself into one of the world’s legendary decorators as he describes the day Sister Parish dropped by for a martini at his house in Maine, the forty-two-room “cottage” that Travolta and his wife, Kelly Preston, had pulled together—by themselves—in two hectic months. 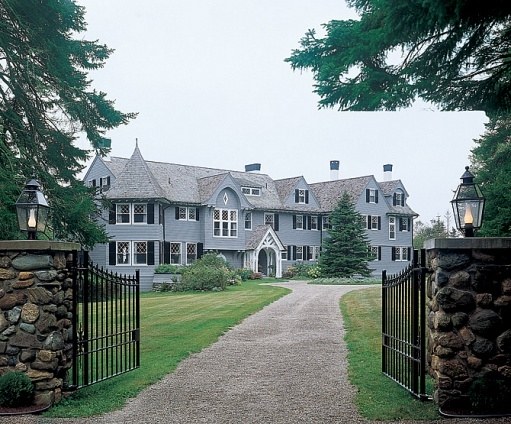 “Sister Parish was wonderful. She reminded me of the nun who hosts the art tours on TV” says the actor, whose famous countenance is now bearing a striking resemblance to Sister Wendy—posture pristine, neck extended, top lip curled under to reveal a generous flash of front teeth. “This house has always been a masterpiece, so Sister Parish knew what it was like before—very dark and somber.”

“Almost spooky” adds Preston. “And John and I came in and redid everything—carpets, furniture—in cream and eggshell. If you need to do it quickly,” she says with a laugh, “go white.”

And they did—much to the delight of the doyenne of American decorating. “She went through the whole house and loved it,” says Travolta, his voice lapsing into a mid-Atlantic drawl with an Oyster Bay intonation. “She said, ‘Ooooooooh, it’s a miracle. I don’t know how you did this. It’s so understated. I love it.’”

John Travolta and Kelly Preston are talking about the fulfillment of a mutual fantasy. Travolta had always wanted a house big enough to entertain his family—all fifty of them—at Christmas. Preston, as it turned out, had the same dream for her own sizable tribe. In 1991, newly wed and newly pregnant with their son, Jett, now seven, the couple finally found what they were looking for in an exclusive enclave off the coast of Maine where Travolta had visited actress Kirstie Alley.

“Kirstie had a big Kennedy-compound-style house on the water,” he recalls, “and wanted everyone to move there. So we looked at all these blue-blood homes. I loved them but knew they wouldn’t cut it size-wise for my whole family. She said, ‘W‘ell, there is another,’ and we came to this house. When I saw it, I said to Kirstie, ‘Why did you with hold this? It’s a fairy-tale house.’”

Preston had the same reaction a few months later when Travolta took her there. “The moment we drove up under that wonderful natural tunnel of trees covering the driveway, I said, ‘This is it.’”

Built in 1903 by architects Peabody and Stearns for the scion of a prominent banking family, the twenty-two-bedroom abode came not only with space and pedigree but with originality, since the front façade has Tudor Revival elements—an unusual twist for a Shingle Style house.

Upon closing the sale in September, the couple immediately sent out invitations for Christmas to fifty-five of their collective family members. “It was wild,” Travolta recalls with a smile. “You could see the potential of the house—in terms of the quality of the wood and craftsmanship, it’s built like a yacht—but there was so much to do. The first month we had to install a hotel-size furnace system and have the kitchen redone.” Not to mention the attic, which the couple gutted and rebuilt into “a children’s fantasy-land,” complete with stage, schoolroom, playroom and a series of thematic bedrooms: the Princess Room, the Airplane Room, the Peter Pan Room.

That done, the Travoltas turned their attention to furnishings. “Fortunately, the house was already full of English antiques,” says Travolta, “thirty percent of which we refurbished and still use.”

What wasn’t there, the two hunted down themselves in New York and Boston in what Travolta calls a “sixty-day marathon.” Camping out in a small farmhouse on the property (heated only by a potbellied stove), they frantically threw together the interiors, garnering ideas through poring over magazines.

“Kelly and I both had the same thing at stake,” Travolta points out, “twenty-five of her people and twenty-five of mine, all meeting each other for the first time. It was a very big deal.”

“We did everything, just the two of us,” Preston says. “One time we flew in for a day with thirty fabric swatches that Johnny and I had numbered. There was no electricity, the sun was going down, and there we were, looking at all the furniture we’d bought piled in the living room, saying, “What do you think about the couch? How about number three? And four, no, maybe sixteen for those two chairs.’ Everything had to be decided before it got dark. It was madness—but so much fun.”

Her husband agrees. “We slept three hours a night. I’d be walking around the house at four a.m., saying, ‘Wait, sweetie, I’ve just got to hang one more picture before we go to bed.’”

Though they were “delirious” by Christmas week, the “real miracle” was pulled off the night their families arrived. “As we saw the headlights coming down the driveway through the snow, Kelly and I were still running around, getting the fires lit, straightening the last lampshade. But when I opened the door, there we stood with big smiles, looking relaxed, saying, ‘Hi there. We’ve been waiting for you.’ I almost passed out.”