First, a caveat: Anyone expecting the home of supermodel Gisele Bündchen and New England Patriots quarterback Tom Brady to be a lavish pleasure dome replete with sultry sirens and gridiron gods cavorting around the pool is in for a serious letdown. Likewise, those who imagine a sprawling palace staffed with a battalion of liveried footmen proffering protein shakes on silver trays have also missed the mark. The reality of Bündchen and Brady’s life in Los Angeles’s Brentwood neighborhood is far more—dare we say it?—normal. 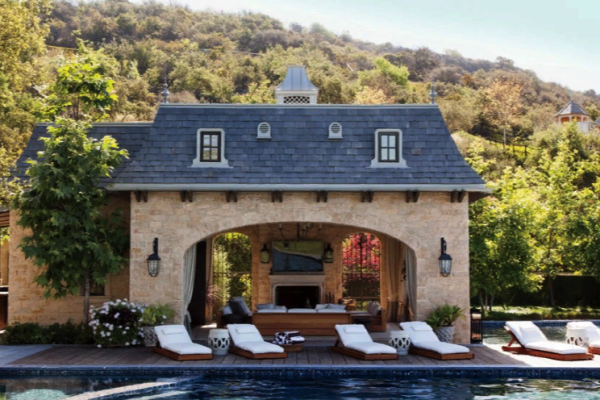 Brady seconds the notion: “Gisele and I have eight sisters between us, and there are lots of kids. We built this house as a sanctuary for our family—a place where we can enjoy being together.”

The couple’s L.A. story began roughly six years ago, when Bündchen and Brady started making regular excursions to the sunny shores of Southern California during the NFL off-season. On one of those trips, prior to their marriage in 2009, they discovered an open lot with stunning views of the Pacific Ocean near the house they were renting. They immediately knew the patch of land would one day be home.

“It was important for us to plant roots for our family, and since we both enjoy the creative process, we decided to start from scratch,” Brady recalls. (The couple has a three-year-old son, Benjamin, and a baby daughter, Vivian Lake, along with six-year-old John, Brady’s son from his previous relationship with actress Bridget Moynahan.)

To help refine their vision of domestic bliss, the pair engaged architect Richard Landry and one of his frequent collaborators, interior designer Joan Behnke. “I’m all about team dynamics and putting the right people together,” says the future Hall of Famer and owner of three Super Bowl rings. “We knew Richard and Joan could take us where we wanted to go without imposing a signature look. They understood that we wanted a comfortable house, not a style statement.”