As anyone who has watched even a little MTV knows, Los Angeles rock-star bachelor pads tend to fall into two distinct categories: louche Vegas-like fantasies or high-tech digs crammed with the latest toys for boys.

And yet the home of arguably the most sizzling rock star on the planet right now—Adam Levine, the front man for Maroon 5—conforms to neither stereotype. 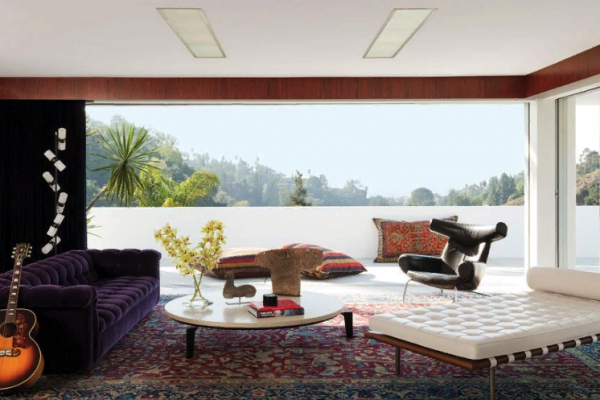 His immaculately refurbished 1940s ranch-style dwelling, suspended high above the city, in the Hollywood Hills, and outfitted with classics by Jean Prouvé, Ludwig Mies van der Rohe, Arne Jacobsen, and other 20th-century-design icons, has a quiet, meticulous air. It is unmistakably the habitat of a man who is confident in his tastes.

Levine has plenty to feel confident about. His infectious hits, among them “She Will Be Loved,” “Makes Me Wonder,” and last year’s number one, “Moves Like Jagger,” have propelled Maroon 5 to three Grammys, sold more than 15 million records, and landed Levine a prime-time turn as a judge and coach on NBC’s The Voice. He has poised, conspicuous star power—extravagant tattoos, matinee-idol looks, a Victoria’s Secret model on his arm—and his career and his house are all of a piece. “Furnishing a home is no different than going into the studio and making music,” Levine says.

Cocksure as he comes across onstage, Levine is, in fact, exceedingly polite and self-deprecating in person. It’s clear even from a brief conversation that this is not a Top 40 flavor of the month who arrived in L.A. with a session tape and a prayer, but a homegrown talent who has had to hone his craft and earn every bit of his success. It all started more than 15 years ago: Levine’s Brentwood School classmates were headed to blue-chip colleges, while he and three friends took a different route, first forming an ill-fated pop-rock band, then adding a fifth member and trying on a more soulful, R & B–inflected sound. “I was sharing a house, renting a bedroom for $800 a month,” Levine recalls of his earliest days in Maroon 5. “I left to go on tour and had no money and had to give up my room.” As the band performed around the world during the next two years, their debut album, Songs About Jane, a collection of highly personal tributes to one of Levine’s ex-girlfriends, slowly gathered a following. When the nonstop touring finally eased and Levine returned to L.A., he was a multiplatinum star. “I suddenly had a career,” the singer/musician says, “but nowhere to live.”

The purchase of what was at the time an unremarkable four-bedroom house perched on the side of Bronson Canyon solved that problem. “I fell in love with the location and the privacy and the fact that it was such a low-key place,” Levine says. “It was Hollywood without being ‘Hollywood.’”

To make the home truly compelling, Levine turned to longtime friend Mark Haddawy, a 20th-century-design collector and co-owner of Resurrection, a vintage-clothing boutique with branches in L.A. and Manhattan. Under Haddawy’s guidance, Levine decided to tear down the internal walls, reducing the number of bedrooms from four to one. They added concrete floors and rosewood paneling throughout, and Carrara marble in the bathrooms to create a sensual contrast of surface textures. “Mark brought soul and color into the place,” Levine notes. Says Haddawy, “For me, it’s about the mix, not just in the materials we used, but in the art we bought for the house.” The collection he and Levine began includes works by Jean-Michel Basquiat, Shepard Fairey, Mark Seliger, and Andy Warhol.