Alex Rodriguez certainly knows a thing or two about knocking it out of the park. After all, the longtime New York Yankees star has racked up some 690 career home runs. (No wonder he’s now the baseball team’s designated hitter.) Still, his latest success—and by all means let’s call it swinging—just might be off the field, in a low-key South Florida enclave. 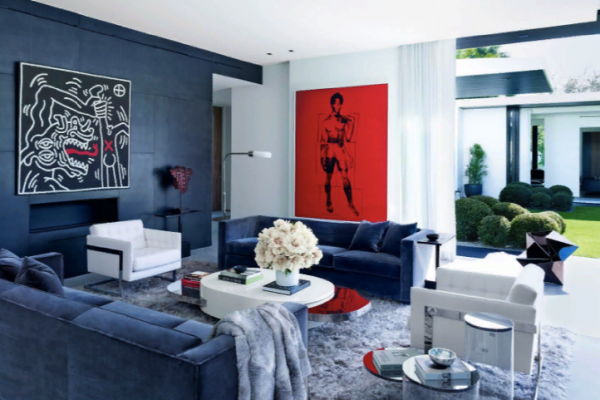 There the athlete known as A-Rod has created a stunning home for himself and his daughters, Natasha and Ella, as well as his impressive art collection. That the sports legend is a discerning aesthete might surprise some fans. The man has an arm; it turns out he also has an eye.

Rodriguez started actively looking for real estate a few years ago. At the time, he was commuting between Manhattan and Miami Beach, where he had built a contemporary-style manse overlooking Biscayne Bay. Waterfront living, suffice it to say, did not always allow for total privacy. So he went off in search of a more secluded sanctuary.

“Traveling as much as I do, what I really wanted was someplace peaceful, where I could rest and recover and be with my daughters,” Rodriguez says (their mother is his former wife, Cynthia). A tip from his sister, Suzy Dunand, a real-estate agent, led him to a quiet lot in Coral Gables, a city that is part of metropolitan Miami. After purchasing the one-and-a-half-acre parcel in 2013, he enlisted architects Ralph Choeff and Paul Fischman in addition to interior decorator Briggs Edward Solomon—the three locally based talents had worked on the hitter’s other residences—to design a house. As for who would oversee the project from foundation to finish, well, there was never any question. Eight years ago Rodriguez launched a high-end construction company with his best friends, Jose Gomez and Jose Moré, whom he’s known since childhood, when they were all baseball fanatics. “The two Joses didn’t get too far,” Moré jokes of the pals’ diverging athletic paths.

Given the results, who wouldn’t hurry back? Erected over the course of a year, the 11,000-square-foot retreat is a showstopper, with sleek forms and striking overhangs that riff on midcentury modernism, in particular the iconic villas found at Trousdale Estates in Beverly Hills. Unlike Rodriguez’s previous Florida home, the Coral Gables house is laid out on just one story so the interiors would connect directly to the grounds. Says Choeff, “Alex wanted to accentuate the indoor-outdoor feel.”

A masculine, largely monochromatic look prevails throughout the rooms, where Solomon complemented concrete expanses with walnut paneling and reclaimed-barn-wood floorboards set in a herringbone pattern. Those surfaces serve as a handsome backdrop to the tightly curated furnishings, among them a vintage Gabriella Crespi cocktail table and several classic Warren Platner designs, including his famous wire chair. All deference is paid, however, to the art: a mix of blue-chip works from the 1980s and contemporary finds, many of them challenging and surprising. In the entrance hall, for instance, a Theaster Gates piece partly composed of roof shingles meets a provocative Sarah Lucas assemblage.