Separate story – about 15-room apartment of the artist. It will be the embodiment of artist’s dreams. According to the artist, he has a lot of things planned. In the studio on the top floor, he is going to paint all the walls of glass. Besides, Fireplace adorns the TV panel of the immense size. In addition, Moscow designer Alex Kozar sees his art studio in the style of hi-tech. And the lower floors – designed by Olga Sokolova. According to her plan, going from room to room, one will pass from epoch to epoch, traveling from century to century. 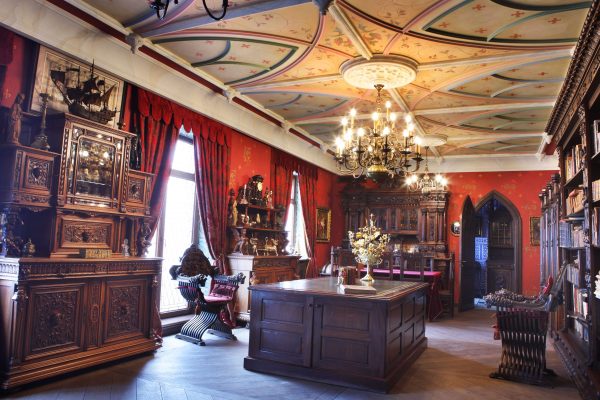 Each room has its own style – Italian, French, and Spanish. They say, the complete impression from the apartment produces a strong effect. Indeed, one of the most beautiful Moscow apartments of XXI century.

The total area of his apartment – about 1000 square meters. Each of 15 rooms has its own purpose: the studio, study, dining room, library, kitchen, reception rooms, and guest bedroom (which he dreams to be visited first by Sophia Loren). On one of the walls of the apartment there is a fresco, which actually is a free composition in the style of the Renaissance. The central figure is a fresco devoted to Leonardo da Vinci. Besides, the other characters – Nikas Safronov’s son Stefano, his girlfriend Masha, friends – TV presenter Nikolai Drozdov, writer Trushkin and other people including the artist himself, on a white horse.

All the decor was collected in Italy, France, Spain, Germany and Belgium. For example, a fireplace of XVI century – from Perugia, but the hand-carved beam ceiling from Spanish castle; fountain – from France. All these rarities were delivered to Moscow, thousands of miles.

Antique furniture was bought at auction in Western Europe, and it costs a quarter of a million euros. A gallery of top European coats of arms is worth something. The apartment will store paintings, and art gallery. In all, Nikas Safronov has painted more than a thousand paintings and several thousand prints, etchings and drawings. His paintings adorn the best museums in the world, and are represented in hundreds of private galleries. Nikas Safronov wants all Muscovites to admire them.

Nikas Safronov was born April 8, 1956 in the city of Ulyanovsk. In the biography of the artist, as well as a biography of each brightness, outstanding person, all the events are significant and not random. They are united with the common and unique – the fate of generations and the search of himself.