American decorator Martin Lawrence Bullard designed a castle in Umbria for Russian billionaire Evgeny Lebedev. He is friends with Eugene for many years. And together they share a love for all Italian things. When Eugene bought the ruined castle of the XII century on a hilltop in Umbria and asked Martin to design it, he immediately realized that it would be a dream project. 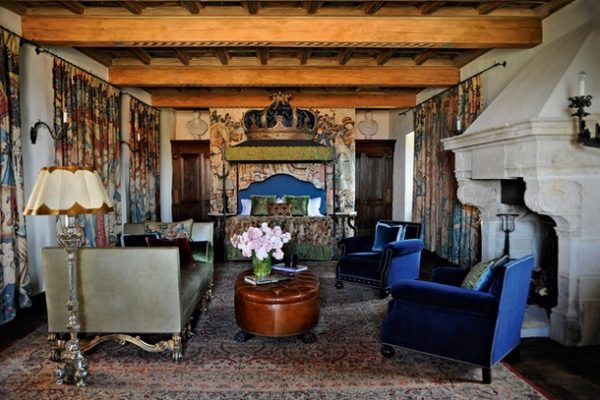 The castle, which served as one of the outposts of the Medici in the XV century, was the home of many noble families in the region. But after the Second World War, it fell into disrepair and was almost completely destroyed. There are no ceilings, no interior walls, but only picturesque ruins.

The building needed a real scientific restoration. And to do the right thing, Martin together with Eugene and Roman architect Domenico Minchilli traveled all over Umbria studying similar castles. The work was long and difficult: the architect conducted excavations at the site (by the way, he found the old chapel of St. Euphrasius), arranged hammam, gym and wine cellar in the former prison cells.

They all had to smash their heads over how to combine restoration with setting modern mechanical, electrical and plumbing systems. Lebedev also needed a kitchen, where one can cook dinner for a hundred people.

Almost three years during the construction process, Martin an Evgeny were travelling around the World looking for antiques at auctions from Parma to New York and Istanbul. Evgeny wanted the castle to look like one notable family owned it for centuries. And they needed things from different eras. When the required item was not found, they made ​​copies.

Umbrian masters forged lattice and engaged in woodcarving. Beams and floors were found in the demolished historic buildings. Paintings were provided by an artist, who worked for Franco Zeffirelli.

At the same time the interior had to be not only beautiful and housing, but also tempting – because Lebedev is an eligible bachelor. So the designer worked hard to provide an atmosphere for romantic rendezvous: candle lighting, benches with velvet cushions in the niches of the fortress walls, marble bath for two, etc.