When it rains it pours, but for model Anne Vyalitsyna (known the world over as Anne V.), the sun came out all at once: She found both her apartment—a three-bedroom, two-bath fixer-upper in the West Village—and the man of her dreams right around the same time. “I moved in there two months before I met my soon-to-be husband,” she says. 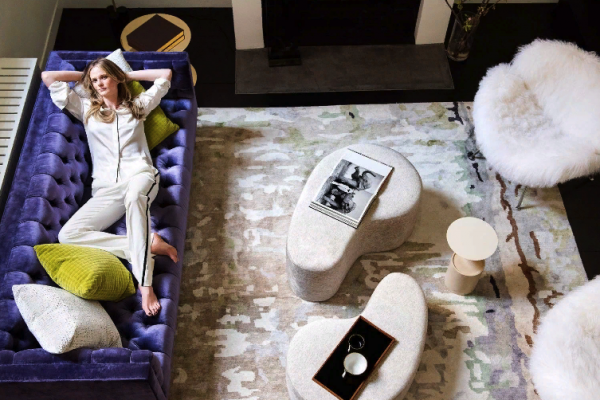 The New York City apartment was Vyalitsyna’s primary residence until she moved to San Francisco with her fiancé, Yahoo! executive Adam Cahan, in late 2014 (the couple welcomed a daughter together in 2015 and got engaged in 2016). But Vyalitsyna wasn’t ready to give up the property she had started decorating and renovating with the help of Lucy Harris, owner of Lucy Harris Studio.

“It was a minor renovation—I would call it a refresh,” says Harris. “It was sort of cosmetic. We looked at finishes and hardware and decided how much we were going to do and what would have the most impact. Since it’s not her primary residence, it didn’t make sense to do a complete gut renovation.”

The runway model had a checklist of things she wanted to change: unappetizing green marble countertops in the kitchen; dark, heavy reclaimed wood doors; and mismatched floors and entryways were just a few of the obstacles. “It felt really woodsy, like you were living in a Spanish-style house in Los Feliz, California, or up in the woods in a cabin. It was too dark. I knew I wanted to make it bright and airy and something white,” Vyalitsyna explains. “I wanted it to feel really happy and light.”

Harris went to work by replacing the green marble countertops with white Corian, removed an old wooden island in the kitchen and added clean white wooden doors throughout the apartment. New cabinetry hardware also lightened up the feel. “The main goal was to make it very functional and easy to use and really brighten it up—make it very inviting,” says Harris. “Anne really enjoys spending time there. She’s just a wonderful host.”

To make the most of her kitchen—a space Vyalitsyna wasn’t initially utilizing—Harris replaced her original long, dark table with one from Organic Modernism that has a round marble top and hammered-brass base. “I never spent time in the kitchen before, and now I spend all my time there. It’s so interesting how the shape of the furniture changes the space, and just putting light in there changes the whole experience,” says Vyalitsyna.

Instead of a traditional coffee table in the living room, Harris opted for what she describes as “two small tables that are amoeba-like in shape that nest together” that can be pulled apart and moved aside while Vyalitsyna and Cahan’s 22-month-old daughter, Alaska, plays. “In New York you don’t always have enough space to have a separate playroom, and you want them to have a space to run around while you’re doing stuff,” Vyalitstna says. The custom coffee table, designed by Harris and fabricated by Manzanares in Long Island City, has no hard edges and is still “really fun and sophisticated and adds a personal touch to the space,” says the designer.