A couple of years ago, when it was time to ditch her 1920s Spanish-Moorish house and “invent a new home space” for herself and her two children, award-winning actress Laura Dern was on a mission. “I had this fantasy of moving them into a treehouse,” she says. Since livable treehouses aren’t exactly in great supply in Los Angeles, she found the next best thing: a minimalist 1953 post-and-beam home by Calvin C. Straub (of the powerhouse midcentury firm Buff, Straub and Hensman), on a lot in Brentwood’s rustic-turned-tony Mandeville Canyon. Lush and jungle-like, the piece of land looked like it could have come straight from the set of Jurassic Park. 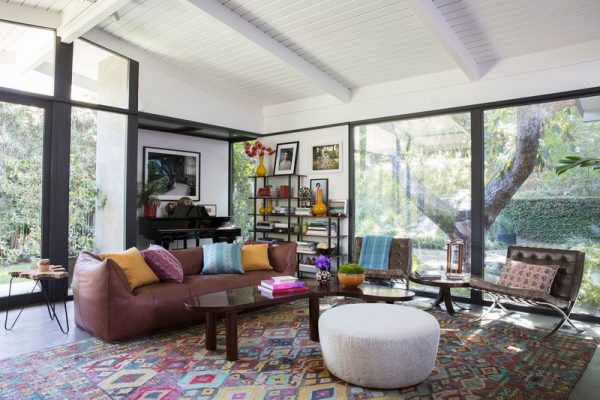 Immediately after seeing it, she called close pal and architect Michael Kovac, whom she was originally introduced to by film director Steven Spielberg. Kovac found the house in solid condition, but tired and dark. “It was like being in a camper—you didn’t have any connection to the outside,” he says. Dern, ever the architecture and interior design junkie, asked him: “How does it continue? What do we do?”

With its “inherently beautiful set of bones,” as Kovac puts it, the updates were easy—and respectful. Director David Lynch, a midcentury architecture buff whom Dern first worked with on Blue Velvet in the 1980s, was also someone she called on for advice early in the project. A few seasons’ worth of renovations opened up the three-bedroom, 2,464 square-foot home immensely. They replaced walls with glass, added a skylight and pool, brightened the interior palette, expanded the kitchen and removed awkward, tiny spaces and a dark backyard hedge that blocked light from radiating down the hill. As a result the home has a beautiful flow, with the inside and out bleeding together.

Last winter, Dern brought in interior designer Trip Haenisch on the recommendation of close friend Courteney Cox. (“She has a really great sense,” says Dern, adding that Cox and Julianne Moore would be “two of our greatest designers” if they weren’t actresses). Haenisch’s job, in her words was to “pull things together, continue to feel breath and warmth, and honor the architecture and keep that story going.” He acted as a curator in many ways, blending a fifty-fifty mixture of the “many interesting things she already owned” with his finds. “Laura values the history of her family,” Haenisch explains. “There are so many goodies, but when you hear the story you go, ‘Wow!’”

For Dern, objects are important because each and every one of them has a story. She’s incredibly nostalgic in a genuinely touching way. Many of the characters she’s played have left their mark on her taste, but her current one, the prickly Renata Klein on HBO’s Big Little Lies, is a polar opposite. Her television home, set in Monterey, is “cool, monochromatic, cinematic, very luxurious, and tranquil. I like to mess it up more, so that’s where we’re incredibly different,” says the single mom.

Indeed, as Haenisch alludes, film buffs would drool on a tour around the Dern’s home: a miniature Tyrannosaurus rex figurine guards the front door—a gift from Spielberg upon wrapping the first Jurassic Park. A trio of Golden Globe statuettes hides behind stacks of books (including the fake An Imperial Afflictionbook from A Fault In Our Stars) on hallway shelves. The period shoes she wore to literal pieces while filming Rambling Rose (which earned both Dern and her mother, actress Diane Ladd, Academy Award nominations in 1992) decorate the family room.

The hat her dad, actor Bruce Dern, wins at the end of Nebraska lives in her daughter, Jaya’s room. In her closet—which went from a typical 1950s-style miniscule wardrobe to a walk-in upon renovation—hangs the dress Lucille Ball wore in I Love Lucy’s iconic “Vitameatavegamin” episode. And in the room of her 15-year-old son, Ellery, is the exact Ralph Lauren–designed suit donned by her dad in 1974’s The Great Gatsby. It was a gift from a dear friend, Eddie Vedder, who happens to be as rabid a collector as Dern.

As a self-proclaimed collector of things, she buys “art, photography, pottery, things from around the world, movie posters and lunch boxes.” Los Angeles’ Modernica and Blackman Cruz are personal go-tos for shopping, inspiration and advice; while foreign markets are a major source of her collectibles, she’s even snagged discarded instruments and pottery from curbsides. Tea cups—from earthen to modern to English china—and salt and pepper shakers are other items of which she has dozens, even hundreds, along with the vintage TV show lunch boxes. When she wrapped Citizen Ruth, Burt Reynolds gave her a Welcome Back Kotter one, which John Travolta was conveniently on set to sign (his wife, Kelly Preston, acted in the film, too).