On a hillside overlooking Beverly Hills is a house that “vibrates with the love that created it,” says its owner, actress Jennifer Aniston.

“I want to say this just right,” she muses. “I am so proud of this house. And I want to celebrate the people who made it: the master craftsmen who poured so much of themselves into its creation.” Not the least of these is designer Stephen Shadley, who worked with her on the project for nearly two and a half years. “I’ll be lucky if I ever do anything with this kind of team and freedom again,“ raves the designer. “It was a project without a problem.” 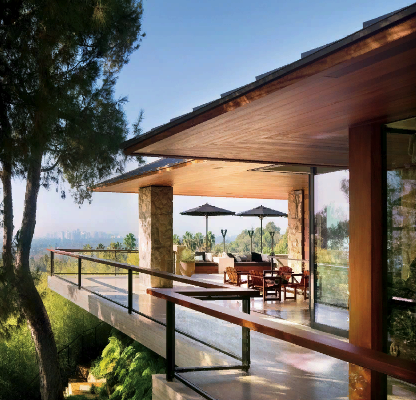 The designer has collaborated with Diane Keaton on two of her homes in Southern California and one in Arizona and with Woody Allen on the interiors of his apartment in New York City. He and Aniston had come close to working together on two other homes.

“I’d heard about this place, and when I saw it, I loved it. I knew it was my métier,” he explains. The house, which was designed by architect Harold W. Levitt in 1970, was under renovation at the time and was, Shadley recalls, “in rough shape. We essentially tore the house apart and rebuilt it.”

Rough shape or not, from the moment Aniston saw the house, she knew it was hers, though it took the woman who owned it seven months to agree to sell it. “I never doubted the house would be mine one day,” the actress remembers.

Why was she so sure it was right for her? She says it was the front doors: big, proud, dramatic 14-foot-tall doors. “I can’t tell you specifically the feeling I had when I walked through the doors for the first time, except to say I knew I was home.”

The house, which Aniston calls Ohana, a reference to the Hawaiian idea of extended family, is the first time she has undertaken the creation of a large house on her own. The result is an open, airy home that, she says, “has been inside me for a long time.”

Working with the building team of Terry Goebel and Scott Werker, Aniston and Shadley created a slightly Asian, even Balinese, feel for the single-level house, which seems to perch directly on a view of Los Angeles.

“She told me at the outset she wanted a quiet, Zen-like retreat that also had a sense of drama for entertaining,” says Shadley. Indeed, the house has a decidedly tropical feel. The doors Aniston fell in love with now open from a travertine bridge that spans a koi pond. Hanging in the hall just inside is a spectacular Murano glass chandelier, one of the first pieces purchased for the property.

The team rebuilt the house’s massive sliding glass panels, including a 20-foot-long section on the lanai. “Part of the fun of the place,” says Shadley, “is not knowing precisely where the walls end.” To better withstand the weather, the floor of the lanai is constructed of the same travertine found at the entrance. It’s enough stone, quips Shadley, to create “our own little Getty.”

The palette throughout was drawn from the texture and richness of Brazilian cumaru, which was used for eaves, floors and walls. Much of the wood, Aniston notes, was not cut but harvested from fallen trees—a nod to her desire for an eco-friendly environment. Extensive solar panels were also installed on the roof.

“I can just imagine the Rat Pack stopping by,” says Aniston. “Someone is playing the piano, and people are laughing in the next room.”

As its name suggests, it is a house designed for entertaining. “I entertain for a living, and I entertain,” Aniston says with a laugh. She has happy memories from her childhood of her parents—both actors—having friends over for poker or charades. When people gather at her house, they tend to congregate in the game room, with its vintage pool table and view of Los Angeles in the distance, or in the kitchen.

“The house has a rather glamorous, old-fashioned Hollywood quality,” she says. “I can just imagine the Rat Pack stopping by; someone is playing the piano, and people are laughing in the next room.”

But Aniston says her favorite room is the kitchen, with its pizza oven and wine room. She fondly remembers sitting on her parents’ kitchen counter as a kid, talking and laughing. She still finds that the kitchen is the place she ends up most often.

The master suite is reached by a long hall populated with photographs taken by Mark Shaw for Life magazine depicting models being fitted backstage at a Pierre Balmain couture show in 1954. Drawn to their intimate quality, Aniston says she knew immediately that they were right for the house.

In a windowed alcove at the end of the hall is a 16th-century bronze of a Chinese scholar reputed to be the world’s first expert on the pulse. The symbolism is not lost on her.