Residential compounds are nothing out of the ordinary in Beverly Hills, where privacy, security, and exclusivity are the sine qua nons of daily life. But even in this more-is-more city, there can’t be too many properties that take up the better part of a street. The lane in question proceeds through a series of forbidding gates and winds steeply up a dramatic hill before arriving at the main house—a modern pile with stucco walls and a steel pitched roof. Given the approach, a visitor can be forgiven for expecting an armed reception committee or a pack of snarling Dobermans. Instead one is greeted by Mabel, a self-possessed black standard poodle, and Wolf, a shy white rescue dog, accompanied by their owner Ellen DeGeneres. 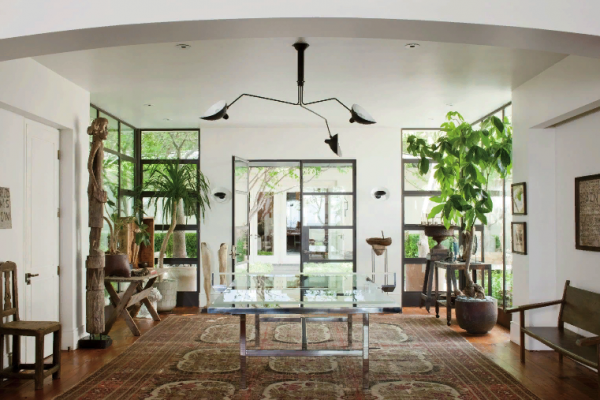 Dressed in a button-down shirt and shorts, the comedian-cum–talk show host leads the way through her lofty living room to the kitchen, where her wife, actor Portia de Rossi, has been preparing a vegan casserole to take to the couple’s 26-acre farm north of Los Angeles. It’s hard to imagine a place more enticing than their three-acre base, but De Rossi, an avid dressage rider, keeps her German warmbloods in the country, and for DeGeneres the second home provides an extra outlet for what can safely be described as an obsession with real estate and interior design.

“We never had a house when I was growing up,” DeGeneres explains, settling into an armchair on one of several terraces with panoramic views of L.A. “We always rented. But my father would dream, and we used to look at houses all the time. I’d pick out which bedroom would be mine and get all excited.” Born in Metairie, Louisiana, she dropped out of college and worked as a housepainter and a bartender before developing a stand-up act that launched a rather more durable career in the entertainment industry. (The Ellen DeGeneres Show, recipient of 36 daytime Emmy awards, began its ninth season this fall.) “The first thing I did when I made money was buy a house. And then—”

DeGeneres has lost track of exactly how many homes she has owned but says the Beverly Hills compound is the seventh she and De Rossi have shared. That would be one for every year they’ve been together. And they don’t appear to be losing momentum: The couple has been toying with the idea of putting the house on the market.

No question the property would make for an extraordinary listing. Built by the renowned architects Buff & Hensman for actor Laurence Harvey, the single-story house has been inhabited over the years by actor Joan Collins and, most recently, Will & Grace cocreator Max Mutchnick. Under his watch, interior designer Melinda Ritz expanded the house and warmed it up with reclaimed-wood floors and ceiling beams. “We’d heard how beautiful it was,” remembers De Rossi, “and then we came over to watch American Idol. We pulled into the driveway and—we just knew before we even walked through the gate.”