Lord knows it wasn’t convenience that inspired Anderson Cooper to build a home in the Brazilian town of Trancoso. Situated on the Atlantic coast in the state of Bahia, the village is a 14-hour schlep—including a flight change and a healthy car ride—from the CNN anchor’s base in Manhattan. Cooper first visited the idyllic hamlet in 2013 on a holiday with his partner, nightlife impresario Benjamin Maisani, and their friend Andy Cohen, the puckish television personality and Real Housewives sire. “Within a day I was fantasizing about buying a house there,” the well-traveled journalist recalls. 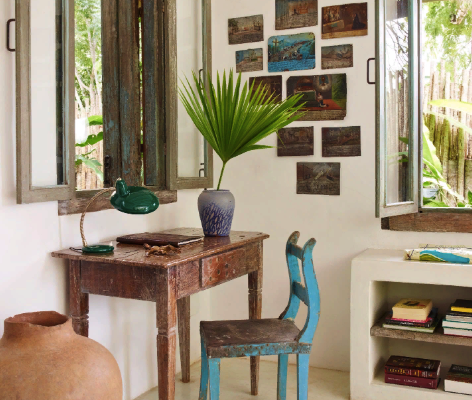 Still, Cooper describes that inaugural sojourn as an intoxicating reverie. “I put my bags down in the bungalow where we were staying, I walked out onto the porch overlooking the Quadrado, the town square, and I just watched for a couple of hours. In the late afternoon, the kids started playing soccer, the horsemen began to return from the fields, and the lights came on in the little fishermen’s cottages. It’s hard to explain the attraction, but I just sat there, spellbound,” he remembers.

hat romantic narrative might sound like a passage from an Isabel Allende novel, but Cooper is the first to acknowledge the poverty of language in capturing a scene of such unaffected beauty and soul.

“People often talk about what a magical place this is. That word always irks me—I don’t trust it somehow,” confesses the 60 Minutescorrespondent and coauthor of The Rainbow Comes and Goes, the shared memoir he recently penned with his mother, Gloria Vanderbilt.

Bordered on the north and south by petite one-level houses dating back some 500 years, and to the east by a 16th-century Catholic church set on a precipice above the ocean, the Quadrado is the social and spiritual heart of Trancoso. “Most people want homes on the beach, but you can find beautiful beaches all over the world. The Quadrado is what makes this place so singularly compelling. I had to be there,” says Cooper, who, on that first visit, soaked up the scene on the square from his perch at Uxua Casa Hotel & Spa, a resort made up of 11 discreetly fabulous guest cottages.

To immerse himself in Trancosan life, Cooper found the perfect cicerone, designer, and local real-estate expert in Wilbert Das, the co-owner and mastermind behind Uxua. Das arrived in Brazil seven years ago, after resigning from his role as creative director of the clothing brand Diesel. “A friend in Italy had mentioned this place, and when I got here, I somehow felt like I was home,” says the fashion fugitive, echoing Cooper’s tale of enchantment.