The concept of house as sanctuary is one of the great clichés of shelter-magazine writing—and for good reason, as anyone who finds comfort in their home can attest. But for sisters Kourtney and Khloé Kardashian, the idea registers on a whole different level. After all, when you’re members of what is arguably America’s most famous family, with so much of your life playing out on reality TV and in the tabloids, you need someplace where the eyes of millions are not watching 24 hours a day. 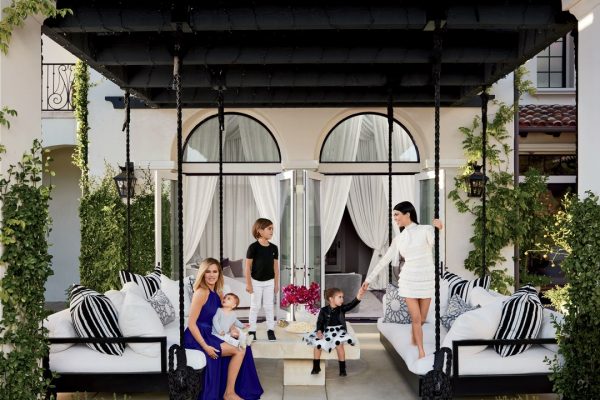 The enterprising duo have found such an escape in homes around the corner from each other in a private Calabasas, California, enclave where the real-estate game is something of a celebrity swap meet. A couple of years ago Kourtney, the elder of the two, bought an 11,500-square-foot Tuscan-style dwelling from former NFL star Keyshawn Johnson. A month or so later Khloé snapped up a nearly 10,000-square-foot Mediterranean Revival house from Justin Bieber. Their half-sister Kylie Jenner also purchased a place here, and materfamilias Kris Jenner lives minutes away with their sister Kim (she’s crashing at Mom’s house with husband Kanye West and their children, Saint and North, while their new Axel Vervoordt–designed home is being built).

Even in such a close-knit family, it’s surprising that Kourtney and Khloé—who have well-defined personalities and aesthetic sensibilities—would engage the same decorator, but they decided to entrust show-business favorite Martyn Lawrence Bullard with the task of tailoring the two houses to their respective tastes.

“I’m amazed how many styles he can interpret,” raves Kourtney.Bullard has known the family for years, having long or­bited in the same constellation of Hollywood glitterati.

For Kourtney, on the other hand, the focus was her three children: sons Mason and Reign, ages six and one, and three-year-old daughter Penelope. “We wanted to make it sophisticated but family-friendly,” notes the decorator. “She’s all about her kids.”